Cape Jazz - on the label

Cape Town August 2012 (since updated) -
Perhaps the most enduring interest of the label is its promotion of Cape Jazz. Though it was not the first interest, most of the releases after 1984 were in some way aligned to this Jazz sub-genre unique to the Western Cape of South Africa.

The first actual release using the words Cape Jazz on the sleeve of a Mountain release - we think on any release anywhere - was on the release of a compilation of productions recorded by label boss, Patrick Lee-Thorp, over a period of about 12 years beginning a couple of years before the start of the label. The music on the compilation was all instrumental and all original compositions by performers themselves. It was released in 1992 under the name Cape Jazz. The artists on the album included, Basil Coetzee, Robbie Jansen, Tony Schilder, Morris Goldberg, Jonathan Butler and The Genuines. 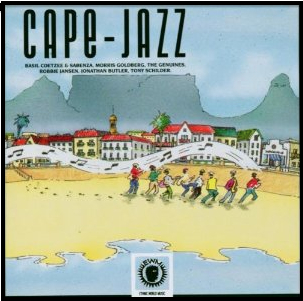 Sleeve of Cape Jazz (Vol 1) - Songwrights Publishers (c)
This design styling was continued throughout the series of all 3 albums.

A few months before the compilation was issued, Basil Coetzee was asked by an American researcher and journalist what he called the music he played, and he said it was Cape Jazz. When asked where the name came from he said that Patrick Lee-Thorp had described his music as such. Lee-Thorp in turn told the journalist that he heard Robbie Jansen describing his music as Cape Jazz and agreed that the nature of the music was sufficiently different from American Jazz or African Jazz, that it should be identified as such. The debate having been ignited by the compilation, resulted in significant commercial and critical success for the record.

The question was more often asked, what is Cape Jazz? Here is Patrick's description.

"It is a cultural music of the people of the Cape, of the Coloured people. Essentially it is blues or folk music, jazzed up, or new music composed which is inspired by the folk music of the Cape. There are common threads like the up-tempo Goema rhythm of the carnival music, common harmonies in the voicing of the brass and vocals, sometimes similar to the Cape Malay choir style of singing mixed with Christian church music. The choice of instrumentation is mostly based on the ability to carry the instrument (in street parades) and its volume when played acoustically, and it has Africa in it, but the Africa of the very southern tip of the continent. The Africa of the Khoi/San tribes and of the Xhosa people with their cyclic repetitive phrases and rhythms. Like most African music it is mostly made to move or dance to".

"In my view the first guru of Cape Jazz was Dollar Brand (Abdullah Ibrahim), he certainly alerted me to the difference between this and other American and European style jazz I had heard before. And the perfect example is his recording of Mannenberg, which featured Basil Coetzee, Robbie Jansen, Morris Goldberg, Monty Weber and Paul Michaels. It was an inspiring work of interpretation on Dollar's part, but that could not have been realised if the same spirit had not been running in the blood of the other players who made it with him".

"I think Cape Jazz was there before Dollar Brand, the local musicians were playing it in the clubs and taverns of the port city, together with sailor musicians from north and south America and from Europe, blending what they new with the jazz influences from overseas. But I think Dollar put his finger on it. He certainly enlightened me. For me the moment came in a concert I organised at the University of Cape Town featuring Dollar Brand, Monty Weber, Paul Michaels, Basil Coetzee and Robbie Jansen. When they played a jazzed up version of the folk traditional, Huis toe gaan, I knew I was hearing Cape Jazz. Robbie later recorded the song for me as part of the Cape Medley, on his Cape Doctor album" 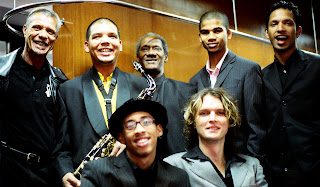 A lot of the Cape Jazz produced in the last 20 years by the label, was done with the musical and technical assistance of sound engineer, Murray Anderson. Together with Zayn Adams, Murray and ourselves, a demo production studio was started. Murray took over the facility and then moved it to the site of UCA Studios, in uptown Cape Town, the facility favoured by Mountain for their productions. Under the renamed Milestones the studio was the birthplace of many productions by our stable of jazz acts.

Over this period two more compilations on this theme were to be released. They were Cape Jazz - 2 (a view of the genre from the viewpoint of selected composers) and Cape Jazz 3 - Goema (a collection of the uptempo style inspired by the Coon Carnival held in Cape Town). The records showcased newer label productions though not all tracks on the volumes were Mountain productions. 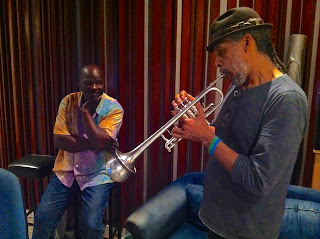 Tony Cedras on trumpet and Dizu Plaatjies in the studio for the CJ4 project. (c) Songwrights Publishers

In the winter of 2012 (the southern hemisphere winter) plans were laid down to record the fourth volume in the series of compilations released to promote this genre. The members of the band, under the leadership of Jack Momple, headed to the studio to experiment with a concept, producer Patrick Lee-Thorp calls "musical democracy". The band featured, Jack on drums, Errol Dyers on guitars and Stephen Erasmus on bass, plus some of the new names in the scene, Ramon Alexander on piano and Mark Fransman and Kyle Shepherd on saxophones.  A second round of recordings for the same album took place in February 2013, this time Jack and Ramon were there but Spencer Mbadu took up the bass. Overdubs were by former Pacific Express keyboard player - since become a celebrated jazzman in New York - Tony Cedras, Louanne Stone, Dizu Plaatjies and Stephen Erasmus.

As with many of the successful acts released on the label, the management of their live performances was undertaken by the mother firm, Lee Thorp Entertainment (LTE).  They saw to it that the music released was performed on stage. 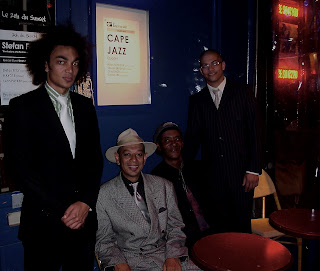 The CJB at the Sunset in Paris May 2009, L to R, Chris Engel, Hilton Schilder, Stephen Erasmus and Carlo Fabe.
(c) Songwrights Publishers 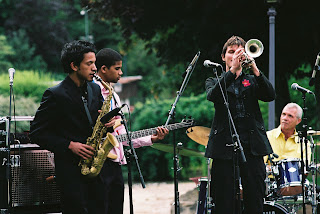 Part of the idea behind the CJB came from Robbie Jansen who believed in taking talented youngsters into the line-up of his groups, and introducing them to the genre. He called it, "passing the message on". In fact the first outing of the CJB was to step in for Robbie who was too ill to fly to the gig. 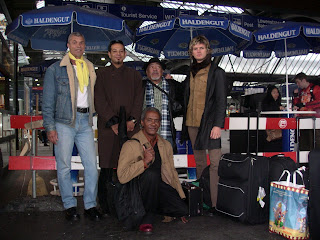 The ensemble pictured above was also known as the Sons of Table Mountain. They recorded with Robbie on a number of occasions being responsible for numerous works which have become Cape Jazz classics. Jack and Robbie were also members of Basil Coetzee's Sabenza band, who contributed tracks to the first CJ compilation albums.